What Makes a Piece of Evidence Inadmissible in Court? 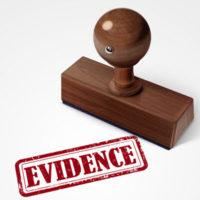 In any criminal case, evidence is a key part of the legal proceeding. Evidence is what the prosecution uses to link the defendant to the offense as well as what the criminal defense team uses to show that the defendant is innocent. Using evidence effectively is the key to convicting an individual or keeping him or her from conviction. But for a piece of evidence to be used this way, it must be admissible in court.

Hearsay is Generally – But Not Always – Inadmissible

Hearsay is defined as evidence presented by a witness that came from another party. For example, if a witness states that another witness told her that the defendant committed the crime in question, this statement is hearsay because the witness did not observe it firsthand. Generally, hearsay is not admissible in court, but there are exceptions to this. A few of these exceptions include if the information can be verified with:

In 1975, the current Federal Rules of Evidence were passed by Congress. These rules govern the validity of various types of evidence that may be presented to the court, the role of witnesses in a legal case, privileges afforded to individuals in certain positions, and how hearsay is to be handled by the court.

Florida also has its own set of rules regarding the use of evidence in criminal cases. Whether state or federal level rules apply to your case depend on whether your case is being handled by the state-level or federal court.

Building your legal defense strategy will involve obtaining and using evidence. It might also involve moving to have inadmissible evidence suppressed. To learn more about developing an effective defense strategy for your case, contact our team of experienced Miami criminal defense lawyers at Ratzan & Faccidomo, LLC today to set up your initial consultation in our office.