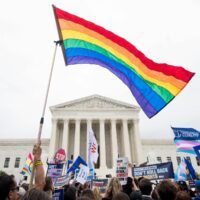 Title VII of the Civil Rights Act of 1964 outlaws employment discrimination based on “race, color, religion, sex, or national origin.” The inclusion of sex under this law has sparked debates as to whether it protects the LGBTQ+ community from discrimination as well, and whether sexual orientation and transgender status discrimination should fall under the category of sex discrimination. This question has now been answered by a landmark Supreme Court decision in the case of Bostock v. Clayton County, GA. In a 6-3 majority, the court ruled in favor of Bostock. In delivering the decision of the court, Justice Gorsuch stated that “The answer is clear. An employer who fires an individual for being homosexual or transgender fires that person for traits or actions it would not have questioned in members of a different sex. Sex plays a necessary and undisguisable role in the decision, exactly what Title VII forbids.” The three dissenting opinions argued that the court should adhere to the historical interpretations of the word sex, which likely did not take sexual orientation or transgender status into account. However, in a ruling that wonderfully aligns with Pride Month, the majority of the court has decided that sex discrimination laws do in fact protect the LGBTQ+ community from employer discrimination, stating that “the limits of the drafters’ imagination supply no reason to ignore the law’s demands.”

Gerald Bostock worked as a welfare services coordinator in Clayton County, Georgia, for ten years. In 2013, he began to participate in a gay softball league during his free time. This activity made his sexual orientation publicly known, and he began to receive critical comments about his homosexuality and participation in the softball league. These comments took place at his office of employment, and in front of his supervisor. Rather than protecting Bostock from the discrimination he was facing at work, his employers decided to conduct an internal audit into the funds he managed. Soon after, he was fired and his employers cited “conduct unbecoming of its employees” as the reason for his termination. After ten years of positive feedback and praise at his job, it was clear to him that his termination was a result of his employer’s knowledge of his sexual orientation. Bostock filed a discrimination charge with the Equal Employment Opportunity Commission (EEOC), and eventually a lawsuit against the county for employment discrimination based on sexual orientation. After multiple lower courts ruled in favor of Clayton County, the case made its way to the Supreme Court, where the court decided in favor of Bostock. This case represents an incredible feat for the LGBTQ+ community and all those in favor of equal employment protections under the law.

The case of Altitude Express, Inc. v. Zarda was heard by SCOTUS in consolidation with Bostock v. Clayton County because of the similar nature of the two cases, both of which argued that employment discrimination based on sexual orientation had taken place. Donald Zarda worked as a skydiving instructor at Altitude Express, Inc. As part of his job, he often had to be strapped into the skydiving equipment in close proximity to the customers. In order to minimize concerns that female customers might have had about being in close proximity to a male instructor, he often mentioned that he was gay. In one particular instance, after Zarda mentioned his sexual orientation, a female customer told Zarda’s manager that Zarda had touched her inappropriately and then mentioned his sexual orientation in order to justify this accusation. Zarda immediately denied having touched her inappropriately, but was fired on the spot. He then filed a charge with the EEOC, citing discrimination based on his sexual orientation and his noncomformity with male gender stereotypes as the reason for his being fired. This case brought up the same question as Bostock v. Clayton County of whether or not Title VII of the Civil Rights Act of 1964 includes discrimination based on sexual orientation. Because of the similarity, the two cases were heard together by the Supreme Court on October 8, 2019, and were decided on June 15, 2020.

This SCOTUS ruling is a victory for equality, as millions of people that were previously left vulnerable to employment discrimination in certain states with fewer protections for the LGBTQ+ community are now protected nationally under the law. Additionally, this decision from a court that is largely conservative was surprising, and creates a hopeful scenario for the future, especially after the Department of Health and Services’ recent undoing of protections for transgender patients facing discrimination by doctors or health insurance companies. While yesterday’s ruling was a major win, the fight for equality is far from over, contact our Miami LGBTQ employment discrimination lawyers if you need more information or assistance.