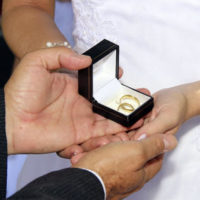 When most people think of fraud, they tend to think of credit card fraud and investment scams. These are two types of fraud, but certainly not the only type. Fraud is a theft crime, which means it can be used to steal money, information, valuables, or anything else with monetary value. This includes the value of an easier path to American citizenship.

In a recent headline from Florida, federal prosecutors charged 27 people with involvement in a marriage fraud ring. The group allegedly operated from 2011 to 2014 and brought people from Moldova, Ukraine, Israel, Venezuela, Colombia, Argentina, and other nations into the United States to enter fraudulent marriages with American citizens to gain an easier path to citizenship.

What is Marriage Fraud?

Marriage fraud is the act of marrying an American citizen or a legal permanent resident to make it easier to obtain a green card, making it easier to become a citizen later. An American citizen can sponsor a spouse for a visa and receive one immediately, cutting the wait time the foreign spouse might otherwise face.

Entering a marriage for the sole purpose of sponsoring an individual for a green card is an act of marriage fraud. Although the government cannot dictate most aspects of your relationship, it can deem your marriage to be one entered fraudulently for the purpose of circumventing United States immigration laws.

An American spouse found guilty of marriage fraud can face a fine of up to $250,000, five years in prison, or both. If he or she is not a citizen, but a permanent resident, he or she can face removal from the country. Individuals involved in marriage fraud cases can also face charges like harboring an alien, conspiracy, and visa fraud.

Defenses to a Marriage Fraud Charge

If you need to defend your marriage as a legitimate marriage to the United States Citizenship & Immigration Service (USCIS), you will need to use evidence to show that you and your spouse intend to build a life together in the United States. Showing that you reside at the same address and that you had communicated and built a relationship before deciding to marry are important ways to show that you are not involved in a sham marriage. Generally, marriages where the couples have no common language, a significant age or education gap, or a significant socioeconomic gap tend to be “flagged” by USCIS for investigations of possible fraud.

Marriage fraud is a serious criminal offense. If you are charged with this offense, you need to start working with an experienced Miami criminal defense lawyer who has experience handling immigration law issues to defend your case. Whether your spouse defrauded you to seek citizenship or the charge is completely baseless does not matter – you could be facing jail time and a substantial fine if you are found guilty of marriage fraud. Contact our team at Ratzan & Faccidomo, LLC today to set up your initial consultation in our office.