Is It A Crime To Bring A Gun To An Airport? 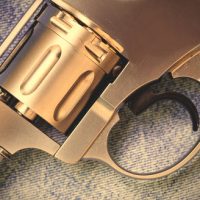 There are plenty of ways to get criminal charges for actions involving guns, even if you do not shoot anyone, and even if the weapon is unloaded.  For example, you can get charged with aggravated assault with a deadly weapon if you point a gun at someone for any reason other than self-defense, even if you never seriously intended to shoot.  If you bought your gun without following the legal procedures for firearm purchase, you could get charged with illegal possession of a firearm.  If you legally purchased a gun and then got a criminal charge for an unrelated offense such as drug possession or wire fraud, you can face charges for possession of a firearm by a convicted felon.          If police find a stash of drugs in your house so big that you could never consume it singlehandedly, no matter how high your tolerance for intoxicating substances might be, and they also find your gun, you could be charged with possession of a firearm in furtherance of a crime; the crime in this case would be drug trafficking.  In other words, there are many ways to get into legal trouble with guns, but a recent incident at the Fort Lauderdale airport is among the stranger ones.  Here our Miami violent crime lawyer explains how TSA agents found a firearm in a most unlikely place.

Florida Laws About Traveling With Firearms

Despite its reputation for flirting with danger, Florida’s gun laws are fairly restrictive; the chances of seeing someone legally carrying a firearm in Florida are much lower than the chances of seeing a feral iguana or Nile monitor lizard.  Florida is one of only three states that ban open carry; this means that you can never go to a public place with your gun visible, even in a holster.  Concealed carry, which is where you can bring your legally owned firearm to public places that allow it, as long as no part of the gun is visible, is legal in Florida, but you need a special permit to carry a concealed weapon.

In other words, some people in Florida can legally bring guns to some places.  Owners of businesses and other private entities have the right to ban guns from their property.  Meanwhile, federal law bans firearms in post offices, federal buildings, courthouses, Native American tribal lands, and the sterile areas of airports.  On military bases, the only people who can have firearms with them are active-duty personnel who have been instructed to carry firearms.

If you travel by airplane, it is legal to bring a firearm with you on your trip.  You must pack it in your checked baggage; it is never legal to take a gun in your carry-on luggage.  Weapons in checked luggage must be unloaded and stored in hard-sided cases; the gun case can be its own piece of checked luggage or you may transport it inside another suitcase.  If you bring ammunition on your trip, it must be in your checked luggage, and it cannot be in the same case with your weapon.  When the agents at the ticket counter ask you if you are transporting firearms, you must answer truthfully.

In 2022, TSA agents have confiscated approximately 700 guns at Florida airports.  If the only thing you did wrong was transport the gun improperly, you will face civil penalties but not criminal ones.  If guns in checked luggage are against the laws of your destination state or country, you can face criminal penalties there.

Early one morning in September 2022, TSA agents at the Fort Lauderdale airport were inspecting checked bags destined for a flight to Port-au-Prince.  The scanner revealed an unusual item in a suitcase, so they took the bag off the conveyor belt and opened it.  Inside the suitcase they found a raw chicken, and inside the chicken was a loaded gun.  News reports did not indicate whether police have made any arrests in connection to the incident, but they reported that the person who checked the suitcase was a citizen of a foreign country.

A felony conviction, even for a non-violent offense, can cost you your right to own a firearm.  A South Florida criminal defense lawyer can help you if you are being accused of illegal ownership of a gun or bringing a gun to a place where people are not allowed to bring them.  Contact Ratzan & Faccidomo in Miami, Florida for a free, confidential consultation about your case.