As Awesome As It May Be, Florida’s Own Philosopher’s Stone Mushroom Is A Schedule I Controlled Substance 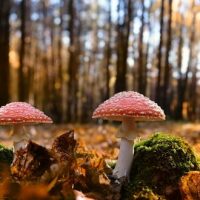 An ancestor of modern medicine and chemistry was alchemy, which had as its goal the search for a substance that could cure all diseases, restore the elderly to youth, and transform ordinary metals into precious metals like gold and silver.  Alchemists writing in Arabic, Latin, and other languages used to call this substance the “philosopher’s stone,” but they acknowledged that it might not be a stone, and it might not be a physical substance at all.  In Florida, people’s transformations are so surprising that you might be tempted to attribute them to alchemy.  A woman walks into a doctor’s office and then walks out looking a generation younger.  A man dives into a crocodile pond and emerges alive but missing a foot.  Then there was the COVID-19 pandemic, where people retired to their homes with the intention of decompressing for a few weeks, only to emerge a year and a half later as insufferable, self-absorbed misanthropes.  Most of the mysterious transformations of Floridians have little relationship to philosophy as it was understood by ancient and medieval alchemists.  Florida does, however, have its own philosopher’s stone, and until recently only one unit of it was believed to occur in nature.  Unfortunately, it is a Schedule I controlled substance.  Here, our Miami drug crimes defense lawyer explains how a very Floridian fungus entered the drug supply and the kinds of trouble that can ensue if you are accused of possessing it.

Even if you find fungi so fascinating that you are a professional mycologist (a biologist specializing in fungi), attending a conference where your colleagues drone on about whether or not two similar looking mushrooms found in two different counties are the same species or not is as boring as it sounds.  Luckily for Steven Pollock, a mycologist from Texas, the conference was in Hillsborough County Florida.  On a sunny day in 1977, Pollock skipped out of a boring mycology conference session to explore the fungi in a field near the conference hotel.  He ended up finding a mushroom never before described in the scientific literature.  He took the mushroom with him back to Texas, and the following year, Pollock and his colleague Gaston Guzman published a report about the new species, which they named Psilocybe tampanensis, in the scientific journal Mycotaxon.

For more than 40 years, it was believed that the mushroom Pollock picked while playing hooky from the mycology conference was one of a kind.  Meanwhile, someone managed to clone the fungus and investigate its psychedelic properties.  The mushroom’s sclerotia (the fungus kingdom’s equivalent of roots) can harden into an easily consumed substance with similar effects to other hallucinogenic mushrooms.  In the drug market, the sclerotia of P. tampanensis became known as “philosopher’s stone,” and everyone who ever tripped on philosopher’s stone was tripping on a clone of Pollock’s original find.  Several years ago, scientists discovered other wild specimens of P. tampanensis, which means that there is more than one philosopher’s stone fungus among us.

Are Psychedelic Mushrooms the New Cannabis?

In the years that have passed since 1977, plenty of research has been published on the potential medical applications of psychedelic mushrooms.  Some doctors and patients consider them a safe and effective treatment for conditions such as depression, post-traumatic stress disorder (PTSD), and even addiction.  Drug policy, however, remains stuck in the 1970s.

According to the Controlled Substances Act, psychedelic mushrooms are a Schedule I controlled substance, which means that they are never legal for medical or recreational use.  Of course, cannabis is still a Schedule I controlled substance at the federal level, despite that many states have legalized it, and even states that don’t have a statewide legal cannabis industry have decriminalized cannabis possession in some counties and municipalities.  Oregon and Colorado are the first states to have passed laws legalizing certain types of psilocybin mushrooms, but for the foreseeable future, Florida law will treat possession of Florida’s own philosopher’s stone fungus as an even more serious crime than possession of cocaine.  The quantity of the substance necessary for possession of a Schedule I controlled substance to result in felony charges can be very small, so it is important to work with a criminal defense lawyer if you are accused of possessing even a single philosopher’s stone mushroom.

A South Florida criminal defense lawyer can help you if you are facing criminal charges for possession of psychedelic mushrooms or other controlled substances.  Contact Ratzan & Faccidomo in Miami, Florida for a free, confidential consultation about your case.