A Broward County Man Just Got a Prison Sentence for Underreporting His Income to the IRS, but Should You Worry About Your Tax Return Misdeeds? 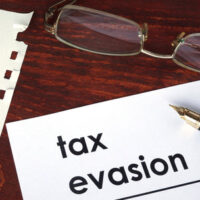 Tax evasion is a crime, and we can all think of famous instances where people got into major legal trouble for not paying the taxes the IRS claims they owe.  You probably know the story of how Al Capone went to prison not for illegal sale of alcoholic beverages or for his alleged connections to acts of violence but for tax evasion.  You might even remember when Wesley Snipes served a prison sentence for failure to file tax returns and other tax evasion-related offenses.  On the other hand, is anyone completely honest on their tax returns?  Were those food delivery charges from days that you were working at home really business expenses?  Has any restaurant server in the history of restaurants ever given the IRS a completely accurate representation of how much money they received in cash tips?  Telling a few fibs on your tax return seems like a victimless crime, and, yes, it is unfair that huge corporations pay next to no taxes while you are required to hand over nearly a third of the income from your freelance work to the IRS.  You can, however, get criminal charges for what first seem like minor omissions or even unavoidable mistakes on your tax returns.  Here, our Miami white collar crimes defense lawyer explains how a man who failed to report the income he earned as an escort ended up getting convicted of tax evasion.

In 2015, Jami Kopacz, 46, of Broward County established a company that the Department of Justice press release refers to variously as JK Trading and JK Training.  He designated the company’s entity type as “Subchapter S,” which meant that it was responsible for paying taxes at the rate usually charged to individuals instead of at the rate typically charged to corporations, which is higher than the individual rate.  The company accepted cash, checks, and electronic money transfers, and wire transfers for Kopacz’s work as a male escort. Kopacz worked for a private escort company that paid him as an independent contractor, as well as provided services for clients unconnected to the aforementioned private escort company.

In 2019, after Kopacz filed his 2018 tax returns, the IRS began to suspect that Kopacz had earned substantially more income than he had been reporting on his income tax returns.  For example, on his 2018 tax return, Kopacz reported that his income was $356,170; $284,969 of this income was from his work for JK Trading.  Given that his underreporting of income affected both Kopacz’s personal tax returns and those of JK Trading, the omissions from his tax returns caused him to pay $278,325 less in taxes than he would have owed if he had been honest about all of his earnings.

The Sentence: 21 Months in Prison Plus Restitution

In 2020, Kopacz pleaded guilty to filing false tax returns.  On March 5, 2021, a court in Fort Lauderdale sentenced him to 21 months in prison.  It also ordered him to pay restitution to the IRS in the amount of $278,325, the additional amount he should have owed the IRS if he had been truthful on his personal and business tax returns between the years of 2015 and 2018.

Could It Happen to You?

These days everyone is a cash-strapped gig worker, and the temptation to bend the truth on your tax returns is palpable.  Maybe you inflated your business expenses a little bit on your tax returns, or perhaps you informally agreed with one or more of your gig employers that they would not issue you a 1099 and the IRS would be none the wiser.  Will you get in trouble with the IRS?  Unless the amounts you misrepresented are huge, you will probably get civil penalties, which can be expensive but don’t end up on your criminal record.  The civil penalty for knowingly making false statements on your tax return is 75 percent of your original tax obligation, with the original amount based on an honest version of your tax return.  If you grossly underreport or income or inflate your expenses, though, or if you hire employees and fail to withhold taxes for them, you can get criminal penalties.  A conviction for tax-related crimes can result in fines, probation, or even imprisonment.

A Miami white collar crime lawyer can help you if you are accused of underreporting your income or otherwise making false statements on your income tax returns.  Contact Ratzan & Faccidomo for a consultation today.